15 Tips for a Better Kickstarter Campaign 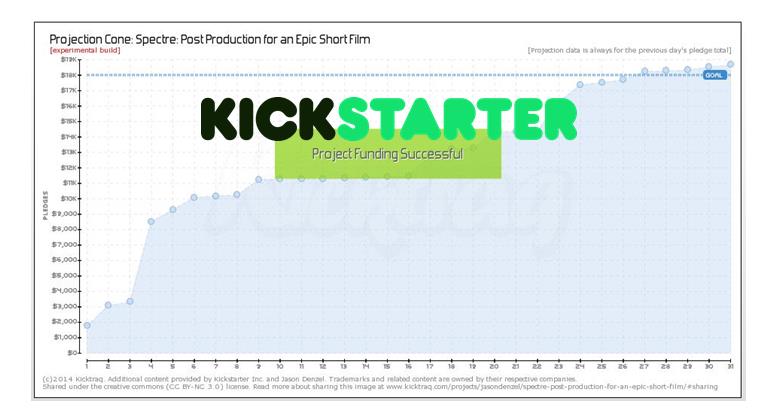 In 2013 I successfully raised $18,664 through Kickstarter in order to complete my short film, Spectre. I learned a lot in the process, and I’ve been wanting to pass on what I could.

This advice is going to be most applicable for small-to-moderately-sized campaigns. Although much of the advice below is relevant to any size campaign, some of it won’t apply if you’re trying to raise hundreds of thousands of dollars or more. Six-figure campaigns are an entirely different beast, of which I have no experience running.

Also, while I’m being very specific to Kickstarter, the same ideas will usually apply to indiegogo, gofundme, or even patreon. I only have experience raising money on Kickstarter, so that’s what I’m going to talk about.

So without further ado, here you go, aspiring entrepreneurs! Here are …

15 Tips for a Better Kickstarter Campaign

If you’re considering asking for money on Kickstarter, then the first thing to do is sign up at Kickstarter.com and contribute to other people’s projects. Not only will you get a sense of what works and what doesn’t by watching other people’s campaigns, but you’ll also show everyone that you’re invested in the concept yourself. Some people get somewhat turned off if you are asking for money but have never contributed to other campaigns.

It’s critical that you take some time to really understand how much you think you can raise. You should have an intuitive feeling of how much you can realistically raise based on the “reach” of your social media, the quality of your pitch, and the type of project. For instance, if you don’t use Facebook, and hardly ever frequent online communities, and have minimal graphics and flair for your Kickstarter campaign, then trying to raise $200k for your fiction novel is going to be tricky. The bigger your project goal, the better your portfolio usually needs to be. If you’re a Level 2 Widget-Maker, it may not be wise to try and Kickstart a Level 30 Widget with a Level 30 sized money goal. Be honest with yourself about your capabilities. Take chances, but ground yourself with a healthy dose of realism. As an experiment, once you think of a goal you think you can achieve, say the following sentence outloud to yourself, and later to a close friend of family member: “I [your name], truly can raise [money goal] using the social network I have access to.” Does it sound absurd? If yes, consider revising your target. While you’ll definitely get strangers to contribute from the unknown corners of the Internet, it’s generally up to you to provide the solid foundation of early backers.

3. Make sure you target enough money

I know, I know, I just told you to not push too far beyond your capability. But at the same time, you need to ensure you pick a dollar amount that will give you enough money to actually do what you need done. If your movie is going to cost $10,000 to get made, don’t do a campaign for $8,000. Figure out what you need, and shoot slightly higher to cover the cost of your incentives (including shipping!) and fees.  To be safe, assume Kickstarter and Amazon (who processes the payments) will take a combined 10% of whatever you raise. Check their website for specific info.

4. Incentives can cost more than you think

The incentives you offer donors need to be worth it. Very often, especially at the higher incentive tiers, the things you offer donors can cost a lot of money. Especially if you have to ship them. Be sure to take the time before launching your campaign to figure out the exact cost of each item (including shipping, if applicable) and factor that into your plan. If, for example, at the $10 donation level you’re offering an $6 item, with $1 shipping, then that means you’ll only make $4 of profit from that donation. (And really closer to $3.50 once you factor in Kickstart and Amazon’s shares.) Open up a spreadsheet, calculate the costs, and make sure there’s enough left over for your project.

As of the time of this article (June, 2014), the U.S. government considers money gained from Kickstarter as pure income. That generally means its taxable. In my case, because I raised $18,000+, I had to declare that when I did my annual taxes. Now, I am not an attorney, nor a tax expert. But be aware that Uncle Sam currently wants a piece of your pie, too. Consult with your qualified tax adviser on how to handle this. In you’re up for it, I encourage you to write to your state or federal representatives and encourage them to draft or support legislation that changes the rules for how crowd-funded income is treated.

6. Your campaign page should be pretty. Your video should be genuine

Take the time to make your Kickstarter campaign page good. Like, really good. Use tasteful graphics. Show off your concept art. Include links to your past work. Tell us about all your relevant awards or experience. Ask a friend with better design skills than you to look over your page and offer advice. Have several trusted friends review your write-up. And for your video (yes, you need a video) focus on being genuine and fun. You don’t need to have a high-quality video willed with clever editing and music and visual effects. What you need to do is get on screen, smile, and try to connect to the viewer in a 1-on-1 way. Kickstarter campaigns tend to succeed based on the strength of the idea, or the strength of the person asking for money. People will donate if they believe in your idea, or if they believe in you. If you’ve invented a new method of preventing wrinkled t-shirts… showcase that. If you’re an unknown singer/songwriter, then showcase your charm and vocals. Focus on that stuff before you worry whether your iPhone has a “good enough camera” for your video. (It does)

Don’t claim your movie will win Sundance. Don’t claim you’ll cast Tom Hanks (unless he’s already agreed to it). Keep yourself, and your promises, grounded. That doesn’t mean you can’t aim high… you should. But keep it real. People can smell over-hyped bullshit from a mile away. (You grokking me? OK, good)

Browse Kickstarter’s archives and find other campaigns similar to yours in both theme and money target amount. If they succeeded, try to discern why. Kicktraq.com has excellent tools for researching how a campaign did over time. Check out their analysis of my campaign.  If you find other, unsuccessful campaigns, try to puzzle out why it didn’t work. That often may not be possible, but often you can get a quick sense that the campaign owner reached far beyond their means, or had a low quality campaign page, or weak pitch. Use your intuition, and study a large amount of campaigns.

9. Tell everyone you know

Once your campaign is live, it’s time to get social. This is when you get on Facebook and do a big post. Send an email to your friends and family. Tell your co-workers. Call in favors. Identify your biggest supporters–the people who’re most likely to advocate for your campaign–early on, and ask them to help you spread the word, too. Continue to tell people about your project throughout the life of the campaign. That means reminding people after some time has passed, and again as the ending nears.

Politely reach out to bloggers, podcasters, message boards, and relevant web communities to tell people about your project. Get on reddit (and learn how it works if necessary) and share your campaign link on the appropriate subreddit. Consider joining groups like Kickingitforward.org, which helps promote your campaign if you agree to help fund and promote other projects after yours succeeds.

Once you’ve appropriately saturated your social circles and reached out to interested bloggers, podcasts, and reddit, you may want to consider paying a little money to “promote” your Facebook posts so it reaches a wider audience. You’d be surprised how far your posts can go for a reasonable price. Likewise, check out Google AdWords, which you can use to make simple text ads that google will bombard its users with. Surprisingly, these things tend to work.

Once you get backers, use the Kickstarter interface to send frequent updates. Not every day…. that’s annoying. But no matter how little you’ve raised, or how few backers you have, stay strong and continue to update. Often people will watch your campaign to see how it progresses over time. The move “alive” your campaign looks, the more it’ll entice people to seriously consider donating.

Reply to every email, question, Facebook comment, or tweet you receive about the project. Reply in as timely a manner as possible. Get the Kickstarter app for your smart phone and reply to questions while you’re waiting in line at the grocery store.  Make sure people see you replying to others.

Sometimes, it all comes down to dumb luck. Maybe your campaign gets featured on Kickstarter.com (not likely). Maybe you get somebody to make a significant donation. Maybe you get mentioned by somebody with a large social following. There’s always a chance you’ll get lucky. Find a deity of good fortune and chant their name. A lot. But if it turns out that your campaign doesn’t succeed, you can always try again. Be honest with yourself as to why your campaign didn’t work, and work to patch that hole. Sharpen your pitch. Re-work your video. Improve your incentives. Broaden your social networks. There’s plenty of campaigns that failed the first time, but worked hard to level up and succeeded the second time.

Have some of your own tips? Leave them in the comments below. I’m also happy to answer questions if you have them.