When RPG’s had teeth: The Bard’s Tale

I’ve played a lot of Role Playing Games (RPG’s) over the years, but my all-time favorite remains to be The Bard’s Tale, the very first RPG I ever really played. While I admit that a large part of that is nostalgia, there’s actually some objective reasoning to my argument.

First, let me explain the story. The plot is rather simple and comes nowhere near the complexity of modern games like Final Fantasy or Dragon Age. Instead, the premise of The Bard’s Tale is very simple: The evil wizard Mangar has trapped the innocent town of Skara Brae in a spell of eternal winter. You must gather a party of six heroes and solve the mysteries of the town’s ancient catacombs and towers in order to reach Mangar and defeat him. Here’s what the box cover said, (per Wikipedia):

Long ago, when magic still prevailed, the evil wizard Mangar the Dark threatened a small but harmonious country town called Skara Brae. Evil creatures oozed into Skara Brae and joined his shadow domain. Mangar froze the surrounding lands with a spell of Eternal Winter, totally isolating Skara Brae from any possible help. Then, one night the town militiamen all disappeared. The future of Skara Brae hung in the balance. And who was left to resist? Only a handful of unproven young Warriors, junior Magic Users, a couple of Bards barely old enough to drink, and some out of work Rogues. You are there. You are the leader of this ragtag group of freedom fighters. Luckily you have a Bard with you to sing your glories, if you survive. For this is the stuff of legends. And so the story begins… Simple enough, right? In theory yes. But in practice, no.

Why it was made of Awesome
The meat of why this particular game remains immortal in my memory is that it genuinely challenged the player in ways that modern RPG’s dare not do today. First, there was no auto-mapping feature, which meant that you would have to map the dungeons by hand in order to survive. This was no small feat considering that the dungeons you had to trudge through were incredibly complex with frequent traps which would spin or teleport you around without any indication that it was doing so. And there was no question that you needed these maps. You could not simply walk into the catacombs or Harkyn’s Castle and blindly make your way through. The sewers alone were a complete nightmare.

Fortunately at the time, I had a friend who happened to own the game’s cluebook, which he allowed me to photocopy. (Yes, yes, I know that’s heavily frowned upon. But trust me in that I’ve consciously made up for it over the years in the considerable contributions I’ve given this game’s lasting legacy; not to mention all the various copies I’ve gotten off eBay!)

Unlike the full-featured game guides of today, the supplemental guide for Bard’s Tale was presented in the form of a journal that you had presumably inherited from an unfortunate party of adventurers who’d previously failed in their assault on Mangar’s domain. Maps were included of every level, but often the advice given would only hint at what needed to happen rather than outright giving you the solutions. As a player, I liked that back when I was 13 years old. Today, I like that even more. It required me to think, and only gave hints, not outright solutions.

Today, those photocopied pages are a worn and battered set of papers that have the authentic feel of an aged journal. The notes and highlights I made 20 years ago lend themselves to that as well. Take a look at the photos below: My cluebook now has the authentic feel of a battered collection of maps.

BTW: The reasoning for not including auto-mapping as a game feature back in the late 80’s was very simple: they hadn’t invented the technology yet. It wouldn’t be until a few years later that games regularly came out with (and heavily advertised) a feature where the game automatically tracked where your charzcters had been.

No Save Game feature
The second reason Bard’s Tale posed a challenge was that there was no going back. You could only save your game when your party had returned to the safety of the Adventurer’s Guild. That meant that anytime you ventured out into the streets or dungeons of Skara Brae, your actions were permanent. You could not “Save and reload” over and over until you won a battle. If your characters died… they were dead. Period. You would have to find a way to bring them back to life which required the casting of a powerful spell or spending a lot of money in a temple. In the depth of the sewers, there’s a message scrawled on the walls which warned players of this:

“The hand of time writes and cannot erase.”

There was one particular dungeon, Kylearan’s Tower, where one you entered the Tower, you could not leave until you completely solved its mysteries, or died entirely. I cannot emphasize enough how thrilling that challenge was! With today’s RPG’s, you always have the safety net of the game’s save game mechanic. There aren’t any games I know of today which offer this sort of All-or-Nothing challenge.

Here’s a picture of Kylearan (who ended up being a friendly wizard), along with some other photos of my battered maps. So here’s to those old school RPG’s, which may not have the depth or polish of modern games, but had its own unique challenges which are unseen today. Cheers to the Bard! 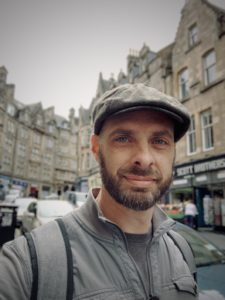