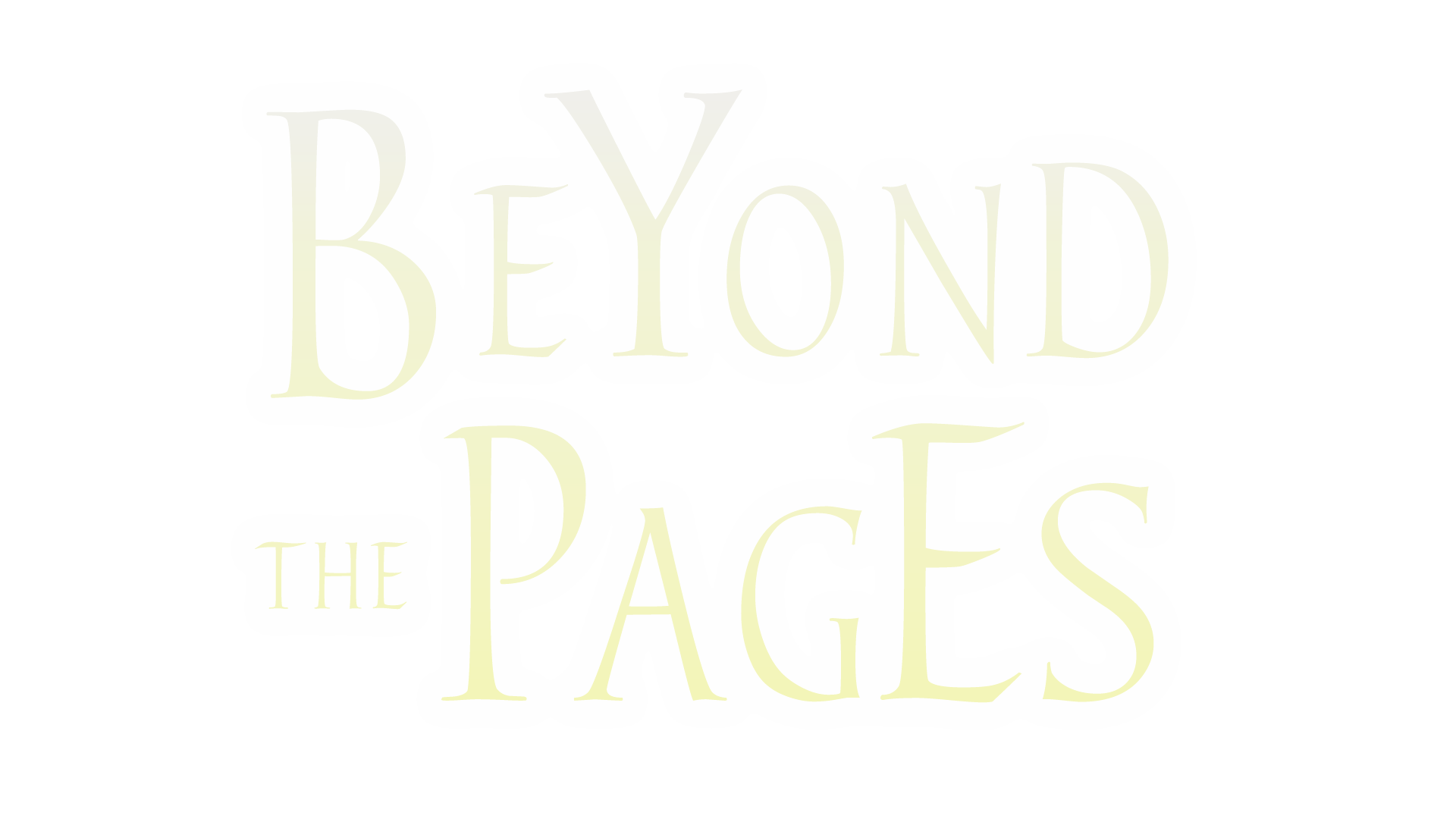 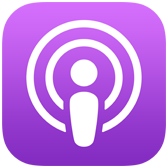 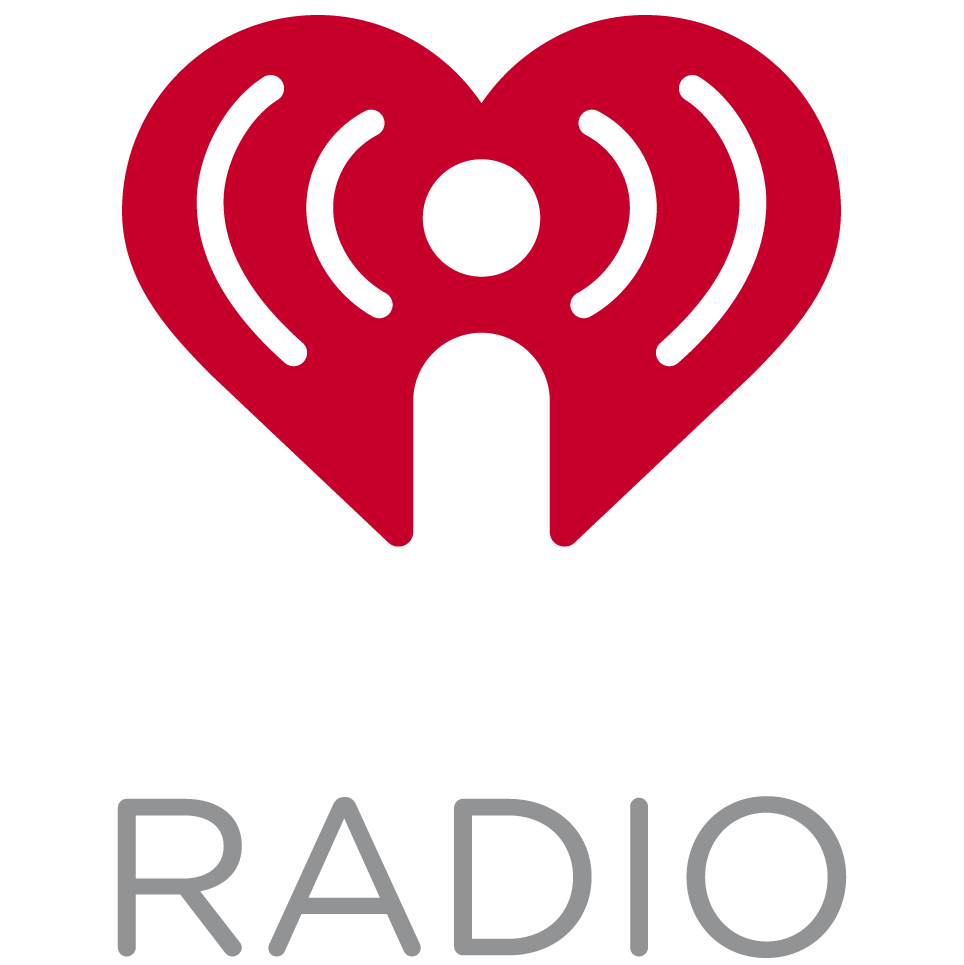 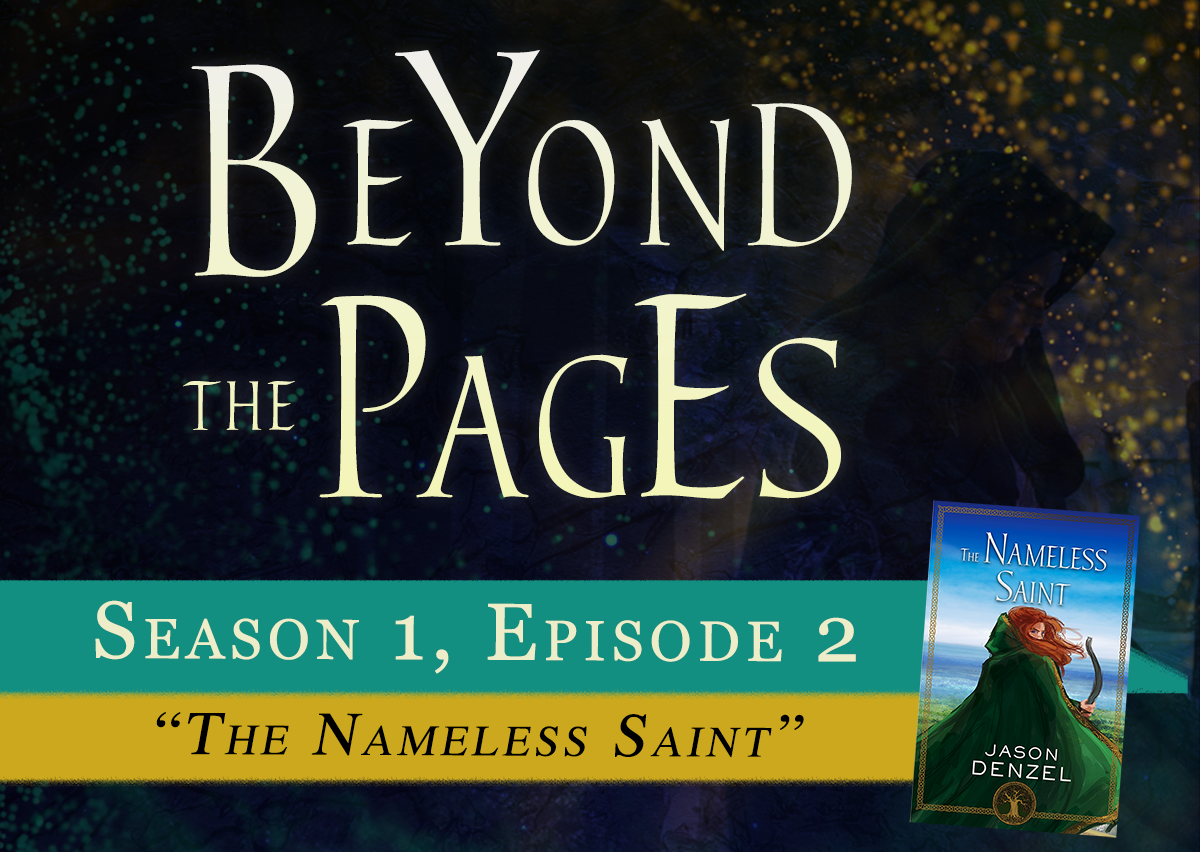 In this episode, I discuss the origins of The Nameless Saint, the prologue to The Mystic Trilogy.

Here’s a photo of me and George R.R. Martin, which I discuss in this episode. 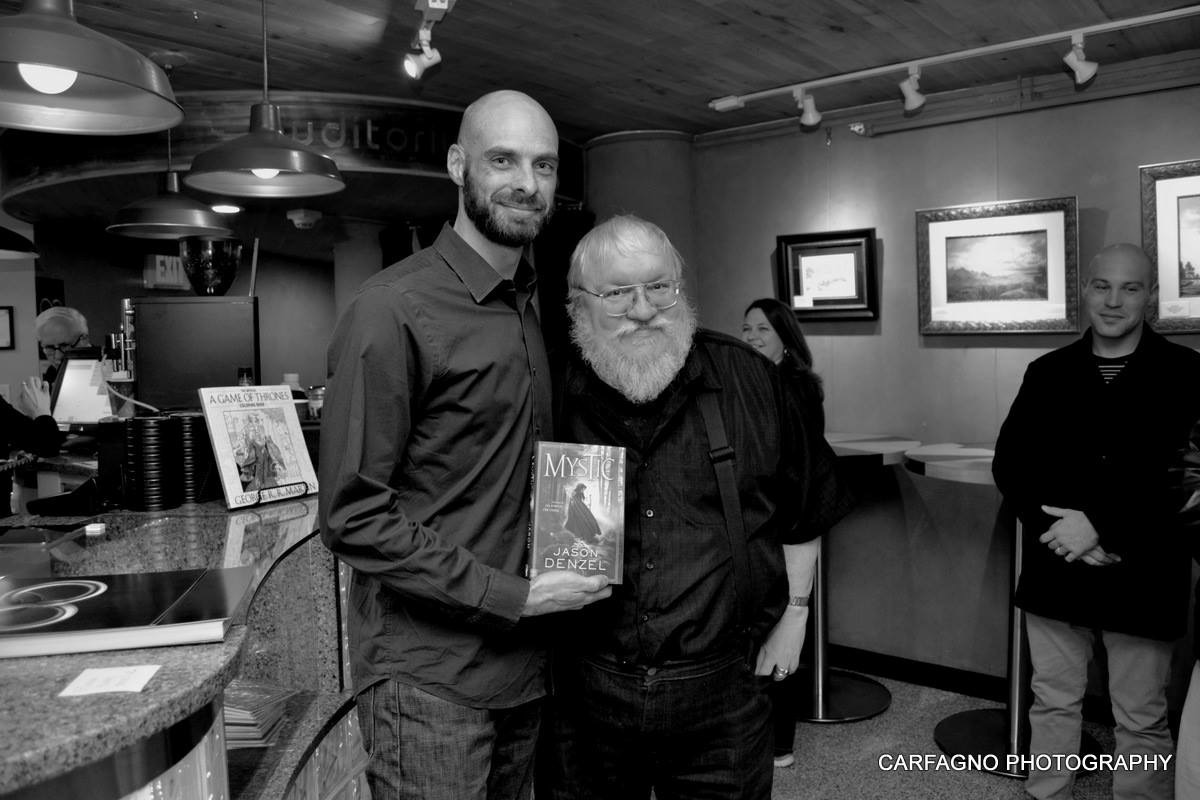 Listen to the full episode here, or subscribe to the show with your favorite podcast app.

Welcome to Beyond the Pages. Thank you for joining me. I’m Jason Denzel, and we’re here to talk about my books.

In 2015, I went on a book tour to promote my debut novel, Mystic. One of the stops on that tour was in Santa Fe, New Mexico at the John Cocteau cinema, which is a small theater owned by legendary fantasy author, George R.R. Martin, who famously wrote A Game of Thrones. George was at the event. And when I arrived along with the other guests, we found him quietly sitting in a chair in the lobby.

It seemed like he was shy or uncomfortable or maybe he just wasn’t in a very social mood. His assistants milled around and made me and the other guests comfortable. I vaguely recall shaking George’s hand, but there wasn’t any real connection and probably wasn’t much eye contact on his part, which is fine. People can be shy. I didn’t think much of it at the time.

The photographer for the event wanted to get a picture of me and George together. And so she silently encouraged me to quietly ‘stand over there next to George next to chair’ while she took some photos. I did and I felt a little awkward sliding in next to George who glared up at the camera. But again, no big deal.

Shortly thereafter we went into the main theater. I was up on stage, along with the other guests to talk about our books. I gave a reading and it was very well received. Afterward, when we were back in the lobby, George came right up to me, patted me on the back, and said ‘That was a great reading!’

He then waved the photographer over, smiled a big smile, and took a bunch of pictures with me. I’ll include some of those in the show notes. The impression I had at the time was that once George had heard something that he recognized and enjoyed and identified with and connected to me with a little bit, that was enough to break the ice and, we were no longer strangers and we were able to connect.

The story that I read that day, that George seemed to enjoy, was The Nameless Saint. And that’s the topic that I’ll be discussing in this episode.

There’s a good chance that even if you’ve read Mystic, book one, you will not have heard of this chapter. That’s because it wasn’t initially included in the book.

Here’s how it came to be. When I wrote the original manuscript for Mystic, I included a prologue and an epilogue. Each of those chapters was told from the point of view of a character named Brigid, who was a figure of legend in the rest of the series. Brigid is a heroic and tragic character, and her story took place 900 years before the events of the main books.

My original idea was that I would gradually tell Brigid’s complete story over the course of each book’s prologue and epilogue. So across three books, there’d be six total chapters that collectively revealed Brigid’s story. When my editor gave me her first initial notes on books. She strongly encouraged me to cut both the prologue and the epilogue. She felt that the story, while it was interesting, was too disconnected from the main narrative.

She was mostly right, let’s say. I agreed to cut the chapters. The epilogue, especially, wasn’t adding much. It was an easy decision for me just to leave it out. It wasn’t very good. And I realized that I had been forcing it in order to match this idea of having a prologue and epilogue in each book.

But leaving the prologue out of the book, never really sat well with me. It was a really good chapter and pretty short as well. And I knew it had important significance in the longer three books story arc that I had envisioned. So after book one was published, I made the prologue into a free downloadable sample that people could download from my website.

I also used it as a reading that I could give at conventions and book signings and other public events that I was speaking at. It only took a few minutes to read through and has some cool action and there’s plenty of mystery People seem to enjoy it. See my note earlier about George R. Martin.

I’ll briefly summarize the story events of the prologue.

The chapter begins when Brigid arrives at the top of a mountain. She’s looking for something, but we don’t know what yet. She’s escorted there by a band of lagharts, lizard-like humanoids with long tails. Brigid is human herself, but she’s their leader.

At the mountain’s summit is a cave. Brigid enters this cave alone, bringing her gear that she’s collected over the years, including a bow named Dauntless and a fire branch and her mystical green cloak.

In the back of the cave, she comes across a rotting corpse that’s still sitting upright. It turns out that this is an ancient woman and that she’s still alive. Brigid drops to her knees, refers to the woman as a Saint, and asks her how she can find her long-lost son. The Nameless Saint imparts some warnings and advice to Brigid, ultimately telling her that she has to release her attachment to her mystical treasures and to other things that she cares about. Only when she does that and embraces something called the Myst, can she find the path to her son. The cave begins to crumble and Brigid escapes just in the nick of time. She has a vision of her son who echoes the advice given by the Saint. In the end, Brigid gives her magical treasures to the lagharts and vows to become a Mystic.

So, short chapter, fun to read, and definitely fun to write as well. And it nicely establishes Brigid and her quest to save Janid. If readers go right from there, reading this prologue into book one, chapter one, as we’re going to do in our next episode, then they’ll hear in that chapter more about Brigid more about the Nameless Saint right away, and they’ll have had that foundation of having read the prologue. We’ll discuss a little bit more here in the next episode. The Nameless Saint is filled with foreshadowing.

I chose the name Brigid because it helped to draw a connection between this fictional world, this fictional island of Moth, and the legends from Ireland.

That’s also why I described her as having light skin and red hair. I have a good deal of Irish ancestry in my family, and my kids both have red hair, and I had an opportunity to visit Ireland right around the time that I wrote these books. So it was fun to dive into that mythology and incorporate some of it into the books.

Speaking of my kids, my boys were young at the time when I wrote this chapter. And as most parents will tell you, when you have a little child, the thought of losing them is so completely heartbreaking. And so through Brigid I wanted to explore the feelings of what it could possibly feel like to have lost a child and to explore what length I would go to, to get them back.

The key with Brigid’s story is that she knew her son Janid wasn’t gone. She knew that he was out there somewhere. But nobody else was going to find her son for her. She knew right away, right off the bat, that she would have to carve her own path to find him. As I wrote Mystic Dragon, book two, Brigid’s story became more and more important to the narrative. And it also played a significant part in book three, Mystic Skies. In this way, it became clear to me that the Nameless Saint chapter was not just a prologue to book one, it was a prologue to the entire series.

While this prologue isn’t strictly required reading for this series, Brigid and her quest become more and more significant as time grows. So I think adds a lot to everything. If you’d like to read the prologue, it’s available on my website, JasonDenzel.com.

So that’s it for this episode. In the next one, we will dive right into chapter one of Mystic and we will meet the protagonist and we will see where everything begins.

As always, you can find me on Twitter and Instagram @jasondenzel and at Facebook.com/JasonDenzelAuthor. Thank you for traveling with me on this journey beyond the pages.