Mistborn: The Alloy of Law

So I finished reading an early “beta” copy of Brandon Sanderson‘s upcoming novel, “Mistborn: The Alloy of Law“. If you’re a big fan of the original Mistborn trilogy (like I am) then you’ll love this book. It takes place a few hundred years after the events of The Hero of Ages. Technology has evolved to the era of railroads and electricity. But of course, Allomancy–the system of burning or tapping metals for magical energy–remains (mostly) in place.

Although shorter than the other Mistborn books, this one has all the classic Sanderson calling cards: compelling and humorous characters, clever fight scenes, and plot twists alllllll the way up to the very last page. When I finished it, I was hungry for more. I hope he returns to this world again soon. 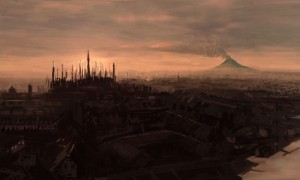 On a side note, this book will forever have the distinction of being the first complete novel I read on my eBook reader. (I own a Barnes and Noble Nook, Wi-Fi edition). As one of Brandon’s beta readers, I received the book via a MS Word document via email. In the past I’ve just printed these out and read them on 8.5×11 computer paper. But that’s just so wasteful, right? So I decided to convert the Word doc to epub format and load it to my Nook. I’m so glad I did.

Look for Mistborn: The Alloy of Law will be published by Tor Books later this year.

Next up for me: I’m going to re-read Patrick Rothfuss’s debut novel, The Name of the Wind, in anticipation of its sequel, The Wise Man’s Fear.