A tribute to Mistborn: The Final Empire 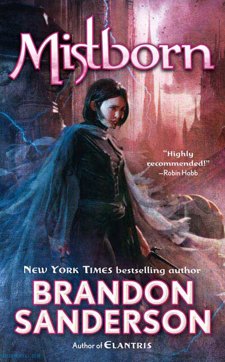 Tor.com recently conducted a survey in which they polled their visitors to learn what the most popular books of the last decade were.

The top books, in order were:

Each of these books is being given a tribute article written by somebody from the industry. I’m very honored to have been asked by Tor to write the tribute for #9: Mistborn, by Brandon Sanderson. 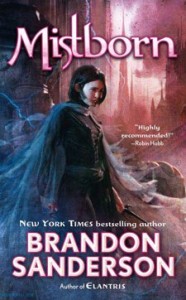 Please head over to Tor.com and read the tribute. If you’ve not already read it, I highly recommend you do.

An Appreciation of Mistborn: The Final Empire

I’ve also had the privilege of reading an early draft of Mistborn: The Alloy of Law, which is an upcoming novel set in the same world as Mistborn.

The #1 book, Old Man’s War, by the amazing John Scalzi is simply outstanding. It was his debut novel, and has since spawned three sequels. It was personally placed into my hands by Tom Doherty, the founder and publisher of Tor Books. The novel is a sci-fi novel about an elderly widower who trades in his life to join the space marines. Good stuff in spades around this book.

#2: American Gods by Neil Gaiman is a book I read in 2001 on my honeymoon. I found it to be extremely compelling, if not exactly a perfect fit for my relaxing and romantic trip to Hawaii that year! Mr Gaiman is a true rock star of the publishing industry today, and this is arguably one of his finest.

#3: The Name of the Wind by Patrick Rothfuss is the book I’ve been saying for years is one of the best fantasy novels I’ve read in years. Heck, everyone has been saying that! I’m actually in the middle of re-reading it right now. The sequel (The Wise Man’s Fear) came out last week and is about to explode all over the New York Times bestseller list in a grand way. Name of the Wind was Mr Rothfuss’s debut novel.

# 7. Jonathan Strange & Mr Norrell by Susanna Clarke is another great debut novel that rocked the industry when it came out. It’s about a wizard–Mr Norrell–in England during the Napoleonic Wars. He’s old and stuffy, but nobody can challenge him cause he’s the ONLY magician alive. He takes an apprentice and they end up as bitter rivals. Then stuff gets even crazier. It’s massive tome which is extremely well written. I have it somewhere on my radar to re-read this novel.

I confess that I’m encouraged by all these successful debut novels. 🙂