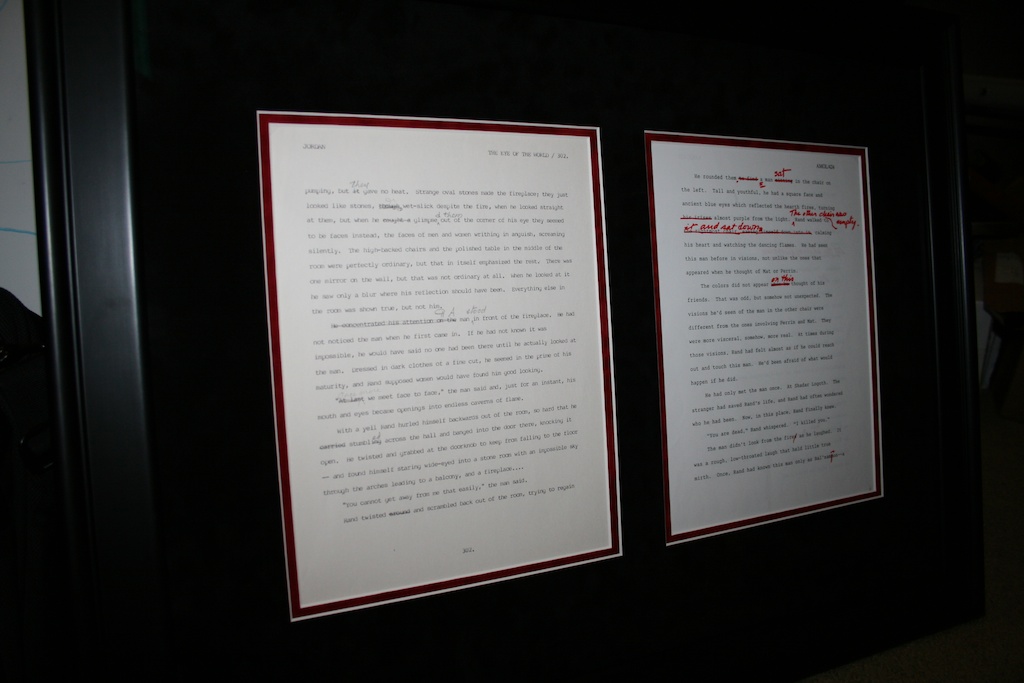 Continuing my little showcase of interesting framed fantasy artwork, I’d like to share a very special and unique piece. At JordanCon in 2009, I won an auction in which one of the original manuscript pages from The Eye of the World was made available. The page was old and somewhat faded, and included numerous penciled edits from both Robert Jordan and his wife Harriet Rigney (who was also his editor). The changes they made are fascinating and significant to any fan of the Wheel of Time series.

The scene depicted from that page was when Rand, the main protagonist of the series, comes face to face with Ba’alzamon–his arch-rival–in a creepy nightmare landscape. Ba’alzamon speaks of their intertwined fates, and how they have fought endlessly, life after life. Robert Jordan had Ba’alzamon’s line from “At last we meet again” to say “Once more we meet again.” (Get it, WoT fans?)

Here’s a look at the page: 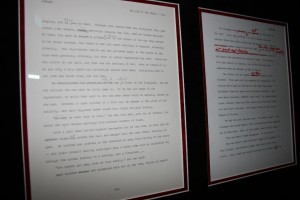 After winning the page in the auction, I showed it to Brandon Sanderson, the author who is currently completing the WoT series in the wake of Robert Jordan’s passing. Brandon looked over the page and then immediately began shuffling through a tall stack of papers that was, in fact, the most recent manuscript copy of The Gathering Storm. He found the page he was looking for, pulled it out, and handed it to me. “Don’t read this until you read the whole book. But you’ll want this page because it goes with the other one.”

The page he showed me was a matching scene with the same characters, from the end of the series. Same location. Same topic, yet both characters had changed dramatically in the course of the saga. In addition, Harriet had made some edits in red ink, and some of them were the same edits she had made 20 years ago for Robert Jordan’s writing! Nobody knew until then that she, as the editor for the entire series, had made similar editorial remarks for the twin scenes, to both authors!

When I got home, I went to the local custom frame shop and had both pages mounted side by side in a custom matte. The page on the left is from EotW. The page on the right is from TGS. (Note that the header still says “AMOL” for “A Memory of Light”. When the scene was written, it was still believed that he would only be writing one book to complete the series). 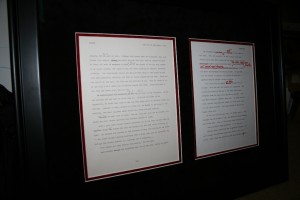 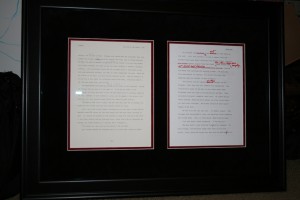 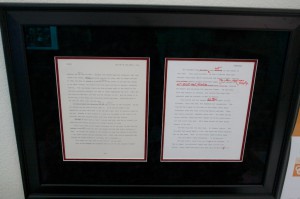 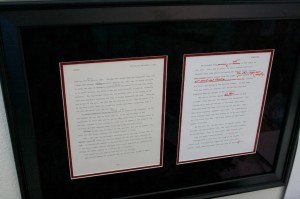